Reigate College is fortunate to have a fantastic new Dramatic Arts Centre (opened September 2017), with its own superb studio and dance studio, in addition to a suite of dedicated Performing Arts practice rooms and classrooms.

Students perform in a variety of productions throughout the year. Recent productions have included ‘Chicago’, ‘We will Rock you’ and ‘Sweet Charity’, plus a final year showcase. These performances give students an insight into working in the industry as well as practical hands-on experience. The department has excellent links with drama schools and professional practitioners who come in on a regular basis to work with students.

Students benefit from regular trips to the theatre, with recent trips including ‘Curious Incident of the dog in the night’, ‘Book of Mormon’, ‘Sweeney Todd’ and ‘Gypsy’.

Many students go on to study Performing Arts at universities and drama schools or work in the industry (e.g. Disney, cruises, touring theatre).

Take a look at some students’ recent performances in the Performing Arts Photo Gallery.

The BTEC Level 3 Extended Certificate is the equivalent to one A Level.

BTEC qualifications are valued in Higher Education and by employers. Students could consider progression routes into the following areas:

Depending on a student’s other Advanced Level courses, they could also consider working in Drama Therapy, Speech Therapy, Occupational Therapy, Teaching, Journalism, Advertising, Marketing or Travel and Tourism.

These are practical, work-related courses, requiring imagination, sensitivity and the ability to get on well with others. Students will learn by completing projects and assignments that are based on realistic workplace situations, activities and demands.

Performing Arts students have the opportunity to take part in:

This course allows students to develop skills in Performance and Acting. Students will develop a broad range of performance skills that will be incorporated in a final production.

There is a coursework element, including actor’s logbook, interviews, research and publicity, plus practical assessment.

Towards the end of the course students will plan a possible route into employment either immediately or after further study.

The exam board for this BTEC is Pearson BTEC.

All students need to have at least five GCSEs at Grade 4 or above (and a satisfactory school reference) in order to be accepted on an A Level/BTEC Level 3 Programme.  In addition, students should meet the following minimum GCSE requirement:

A typical Performing Arts student is lively, ambitious, hardworking and expressive. It is vital that they are willing to perform in public, work with others, solve problems, plan their own learning, and communicate effectively through speaking. Students should also be able to use information technology for research and for drafting and writing coursework.

The Acting course focuses on acting techniques including scripted work, devising and improvisation. There is no singing or dancing on the acting course, however we will explore vocal work and movement in relation to contemporary demands on the Actor.  Areas we focus on include: Shakespeare, Brecht, Stanislavski and Community Theatre.

Musical Theatre is the study of Broadway and West End shows and the practitioners studied range from Andrew Lloyd Webber to Sondheim and Bernstein.  There are elements of vocal chorus technique and ensemble dance.  In recent years we have explored and performed extracts of Heathers, We Will Rock You and Sweeney Todd.

Students who chose to spend the majority, or all, of their time in the Performing Arts department will probably have their minds set on continuing with Performing Arts at university or drama school and or pursuing a career in this sector.

What kind of courses do students go on to study?

Our students go on to a huge variety of performance courses after they finish College.  The department has an excellent reputation with Higher Education establishments.  Recent destinations have been the Guildford School of Acting, Barcelona Institute of the Arts, Italia Conti and PPA, and prestigious universities such as Exeter, Chichester and Bournemouth.

You’ll be invited to an audition workshop lasting approximately 90 minutes.  During this time, you’ll explore and perform small extracts of repertoire covering all three disciplines of acting, movement and vocal work.  You’ll also use the lines you’ve been sent to learn in short improvisation exercises. 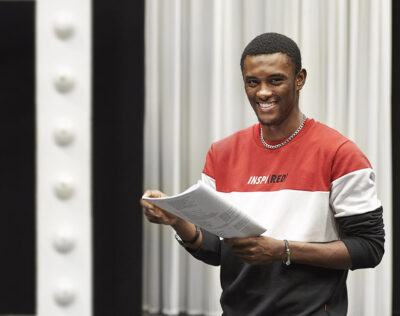