This exciting new course, introduced in response to a growing number of students wanting to focus exclusively on Performing Arts during their time at College,  is a stepping stone to performing arts jobs, drama school or university, and is the equivalent to 3 A Levels.

Working as part of a tight-knit production company, students have the opportunity to develop their skills and techniques in the three areas of Acting, Musical Theatre and Dance.

Many students will have had limited or no experience in at least one of these areas, but this should not put prospective students off. The nurturing environment in which you’ll become part will allow you to develop the necessary skills you’ll need to be successful.  Far more important is evidence at audition of  potential ability and the desire to learn and develop your skills and passion.

Each of the three elements of the course are very practical and give students the opportunity to hone their performance skills, while gaining experience in the organisation and development of performance pieces.

Students benefit from being taught by staff who’ve worked professionally in the Performing Arts industry. The friendly, lively nature of the teaching groups contributes to an extremely supportive and dynamic environment.

The BTEC Level 3 Extended Diploma in Performing Arts (Acting, Musical Theatre and Dance) course focuses on developing practical skills relating to performance and there are many opportunities to take part in a variety of productions. Students will also investigate the structure of performance and the training of performers.

On the Acting course, students will learn about the styles of different practitioners such as Shakespeare, Brecht and Stanislavski and explore the ideas and themes of contemporary theatre, as well as devising and producing original work.

On the Musical Theatre course students explore the disciplines of Voice, Drama and Movement and the links between them. The course requires imagination, sensitivity and the ability to get on well with others. Assignments are based on realistic workplace situations, activities and demands.

The Movement element of the Performing Arts Diploma course appeals to students who are interested in developing their understanding and grasp of choreography as well as working on their own dance skills.

Performing Arts students have the opportunity to take part in a variety of course-related experiences. In the last couple of years, these have included:

Each term students will work towards a production that will involve one or more of the three disciplines (Acting, Musical Theatre and Dance). Students should be aware that there is a written external assessment as well as a practical one.

The exam board for these BTECs is Pearson BTEC.

A Merit or above in BTEC Level 2 Performing Arts will also be considered.

All students will be required to audition in multiple disciplines to gain a place on the Extended Diploma course.

A typical Performing Arts student is lively, ambitious, hardworking and expressive. It is vital that they should be willing to perform in public, plan their own learning and work with others. They also need to be computer literate.

The Acting course focuses on acting techniques, including scripted work, devising and improvisation. There is no singing or dancing on the Acting course, however we will explore vocal work and movement in relation to contemporary demands on the actor.  Areas we focus on include: Shakespeare, Brecht, Stanislavski and Community Theatre.

Musical Theatre is the study of Broadway and West End shows and the practitioners studied range from Andrew Lloyd Webber to Sondheim and Bernstein.  There are elements of vocal chorus technique and ensemble dance.  In recent years we have explored and performed extracts of Heathers, We Will Rock You and Sweeney Todd.

Students who chose to spend the majority, or all, of their time in the Performing Arts department will probably have their minds set on continuing with Performing Arts at university or drama school and or pursuing a career in this sector.

What kind of courses do students go on to study?

Our students go on to a huge variety of performance courses after they finish College.  The department has an excellent reputation with Higher Education establishments.  Recent destinations have included the Guildford School of Acting, Barcelona Institute of the Arts, Italia Conti and PPA, and prestigious universities such as Exeter, Chichester and Bournemouth.

You’ll be invited to an audition workshop lasting approximately 90 minutes.  During this time, you’ll explore and perform small extracts of repertoire which explore all three disciplines of acting, movement and vocal work.  You’ll also use the lines you’ve been sent to learn in short improvisation exercises. 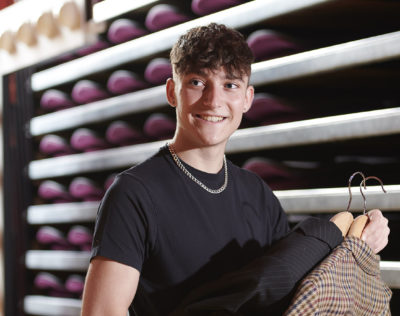