On the combined English Language & Literature course, students will study a range of writing from a variety of genres, including the main literary types: novels, poetry and drama. Students will also study a wide selection of non-fiction texts, ranging from newspaper journalism to autobiographies and travel writing.Texts are studied from both literary and linguistic viewpoints. The language of speech and conversation will also form part of this course and students will examine the way speech is used in everyday life and in literary dialogue.

Overall, the course aims to foster a deeper understanding of how the English language is used in particular contexts and for different purposes and audiences.  It is excellent preparation for undergraduate study on a range of English-related courses at university.

Many students continue with an English or English-related degree at university.  Others study Law, History, Sociology and History for example, making excellent use of the linguistic analysis skills acquired from A Level English.

On this course, students will learn how to use an ‘integrated’ analytical approach to spoken and written texts, using both literary and linguistic concepts and terminology.

Basic concepts from a linguistic approach will be taught, enabling students to be more precise in their interpretation of texts. These ‘frameworks’ include:

Students will study an Anthology of spoken and written texts entitled Voices in Speech and Writing, which contains a wide variety of texts, such as newspaper articles and reports; extracts from autobiographies, diaries, travel writing and digital texts (such as ‘blogs’); book and television reviews. Other examples of these types of text will be studied to develop the skills of writing comparatively. A new drama text will be studied in the second year: Translations by Brian Friel

Students will study one compulsory prose fiction ‘anchor’ text, F. Scott Fitzgerald’s The Great Gatsby and Shakespeare’s Othello. This ‘text pairing’ will be following the theme: Society and the Individual.

The coursework component, worth 20%,  requires the production of creative writing in response to the study of two stimulus texts. Students will produce fiction and non-fiction creative writing and analyse their language choices in a commentary.

English Language & Literature A Level students have the opportunity to take part in a variety of course-related experiences. We always try to enrich students’ study of texts with trips to see plays or to hear authors discussing their work. In recent years, these have included:

The A Level is assessed by examination and coursework. There are two written examinations of 2 hours 30 minutes, each worth 40% of the final qualification, plus a coursework component worth 20%.  The exam board for this A Level is Pearson Edexcel.

In addition, technical accuracy in spelling, punctuation and grammar is essential for achieving a good grade at A Level.

Students will succeed on this course if they:

All other applicants should download and return the 2020 application form. 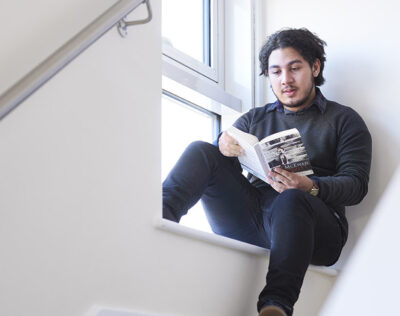