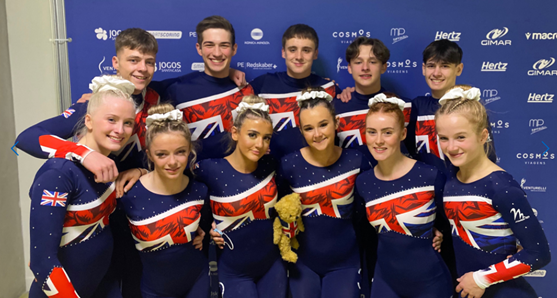 Belated congratulations to Lower Sixth Student Emily Marti-Cornish who at the beginning of December 2021, competed for Great Britain as part of the GB Junior Mixed Group, at the 2021 TeamGym European Championships held in Portugal.

Emily and her team mates made gymnastics history over the four days of competition, winning Britain’s first ever TeamGym gold. Emily, who was previously at Oakwood School and is studying BTECs in Health & Social Care, Sport and Applied Human Biology explained, “The age range for our team was 14-18 years old and there were 12 members of the squad with 8 competing in the final. I was part of the team since the selection event and competed in floor, trampette, vault and tumble. I train with Hawth gymnastics and compete with them throughout the year. I’ve been doing gymnastics for 10 years and competing for Great Britain since I was 13.”

Emily is pictured far left, with another former student, Isabella Hunt, second from the right.